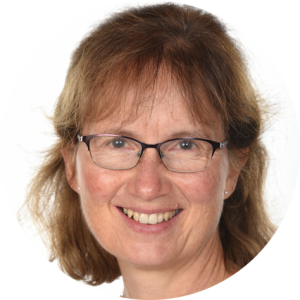 Jo then spent ten years living in Paris and working for Banque Paribas (now BNP Paribas) in the Capital Markets back offices and she was part of the team responsible for altering the computer system to manage the new currency, the Euro. Returning to England in 1998, Jo trained as a teacher in Sheffield, working there for two and half years. After her marriage, she moved to Whitstable in Kent and continued teaching part-time while she had her two children. Jo and her family moved back to Suffolk in 2009 and Jo joined Woodbridge Primary School in 2011.

Jo enjoys music in all its forms, travelling, cooking, swimming and keeping up with the friends she has made in all the different places she has lived. 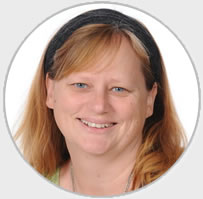 Tracy Watson-Brown has a degree in American studies and English Literature. After her degree studies, Tracy completed her PGCE in Oxford before coming to Suffolk in 1992 to get married.

Tracy taught in Felixstowe before taking a break to raise her two sons, during this time she worked as a youth worker and children and family worker for the Salvation Army.

Tracy is the school’s Pastoral Lead, working one-2-one and with small groups across the school. She is qualified both as a teacher and an Emotional Literacy Support Assistant (ELSA) and has undertaken a wide range of professional development in neurodiversity, and children’s mental health. She covers class teachers across the school as the need arises.

In her spare time, Tracy likes to write poetry and has published four volumes. Her idea of a lovely time is a cup of tea in the sunshine (preferably while looking at the sea).