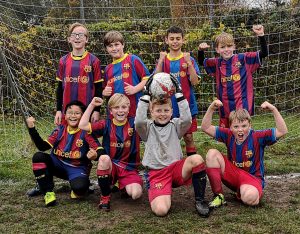 With an early 2:30pm kick off, we were ready to go with Corey as striker, Riley D as right wing, Jamie as left wing, Jake as right defence, Flynn as centre defence, Ayden as left defence, Marcus as sub and Harvey in goal. It was Bawdsey’s kick off and they had a strong run up the pitch. They had alot of attempts to score in the first half but we nearly saved most of them and then Riley D nutmegs the goalkeeper.

In the second half we scored three goals: one by Jamie; another from Riley D; then one from Corey to finalise the scores