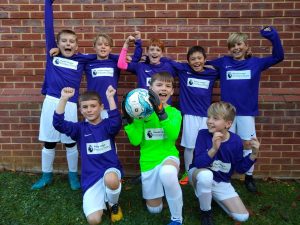 On Thursday 8th November, our school football team (the A team) went to Grundisburgh Primary to play their team. The game kicked off and shortly Kai H put us in the lead. It was a wonderful strike from the edge of the area that went through the goalkeeper’s legs. Soon, we were caught on the attack and they forced Harry S to make an outstanding save. Then the half time whistle blew and we were given a team talk from Nigel – our manager. Feeling great we went back on the field to start the 2nd half. About 5 minutes into the 2nd half, Matthew whipped a corner in which resulted in an own goal from the Grundisburgh defender. Shortly after, Kai H played a through ball for Riley H who then slotted a low shot past the keeper. Feeling in high spirits, we were caught out by two through balls that they then went on to score from both. The final score was Woodbridge 3 Grundisburgh 2.

Harry S (Captain) – outstanding saves in the 1st half and he was confident when meeting the ball, especially when he tipped the ball behind the post in the first half.

Dan – great tackles and got the ball cleared when the opposition were on the attack.

Patrick – he was a brilliant defender and when he was in Grundisburgh’s half his pace to get back was exceptional. He also blocked loads of shots really well.

Harry B – He was good at marking his man and getting back when the ball was in our half. He was also an amazing defender.

Kai H (Man of the Match) – His pace was electric and his shooting was on second to none. Also, his passing was exceptional.

Riley H – His shooting was on point and his passing was good when attacking. Also, his vision was excellent when having a go at goal.

Billy – his link up play was good and he made some strong tackles when he was defending.